Atelier 88 has moved to Galicia. Lottie and Pete Nevin have a new project called The Red House Project. Printmaking, art courses, other initiatives

Make Do And Mend 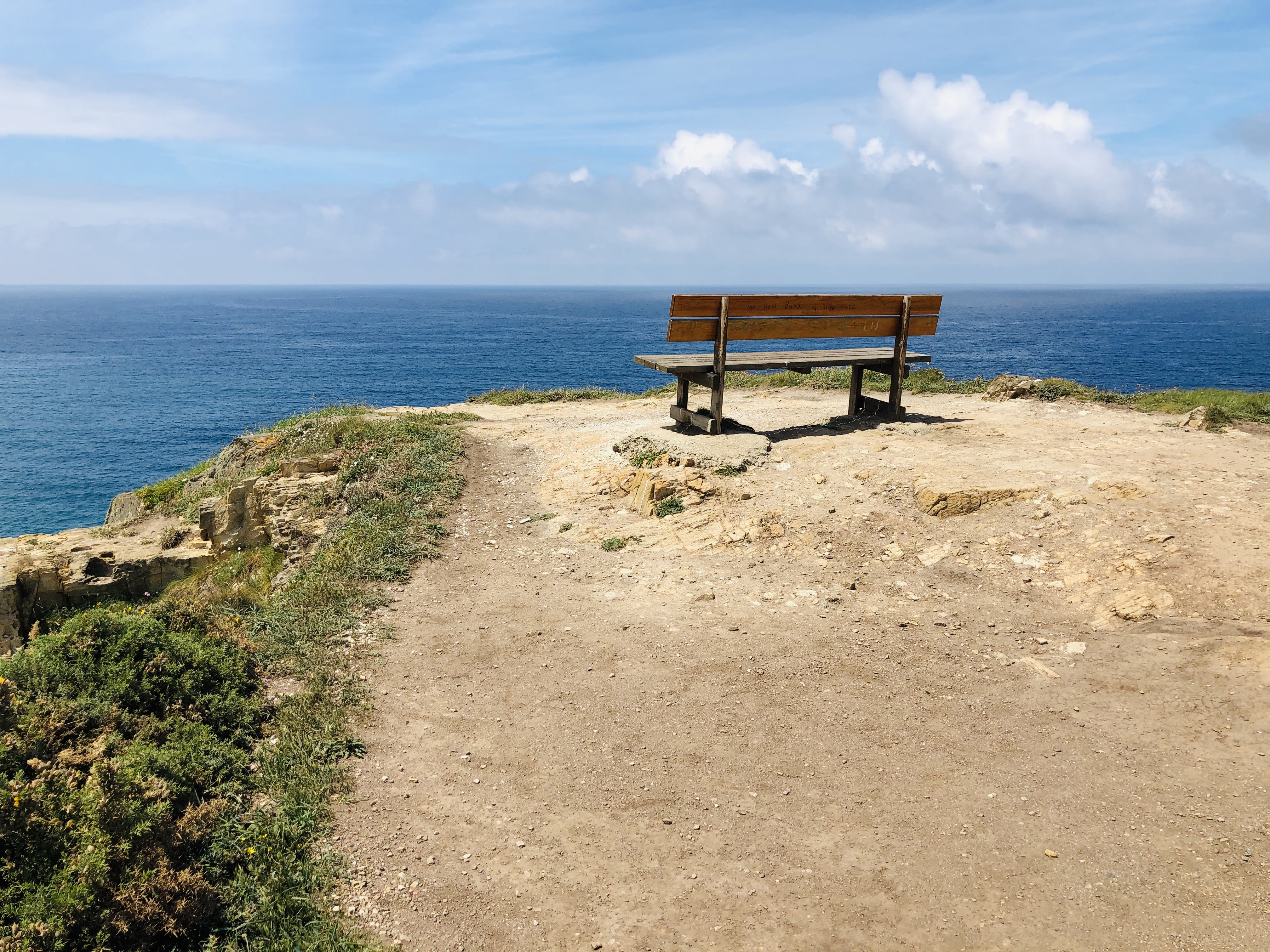 It would be all too easy to gloss over the hard, shitty parts and just write about what’s good, but life’s not like that, is it? And if I am to write an honest account about our life here and our projects, I need to address not just the positives, of which there are, i […] 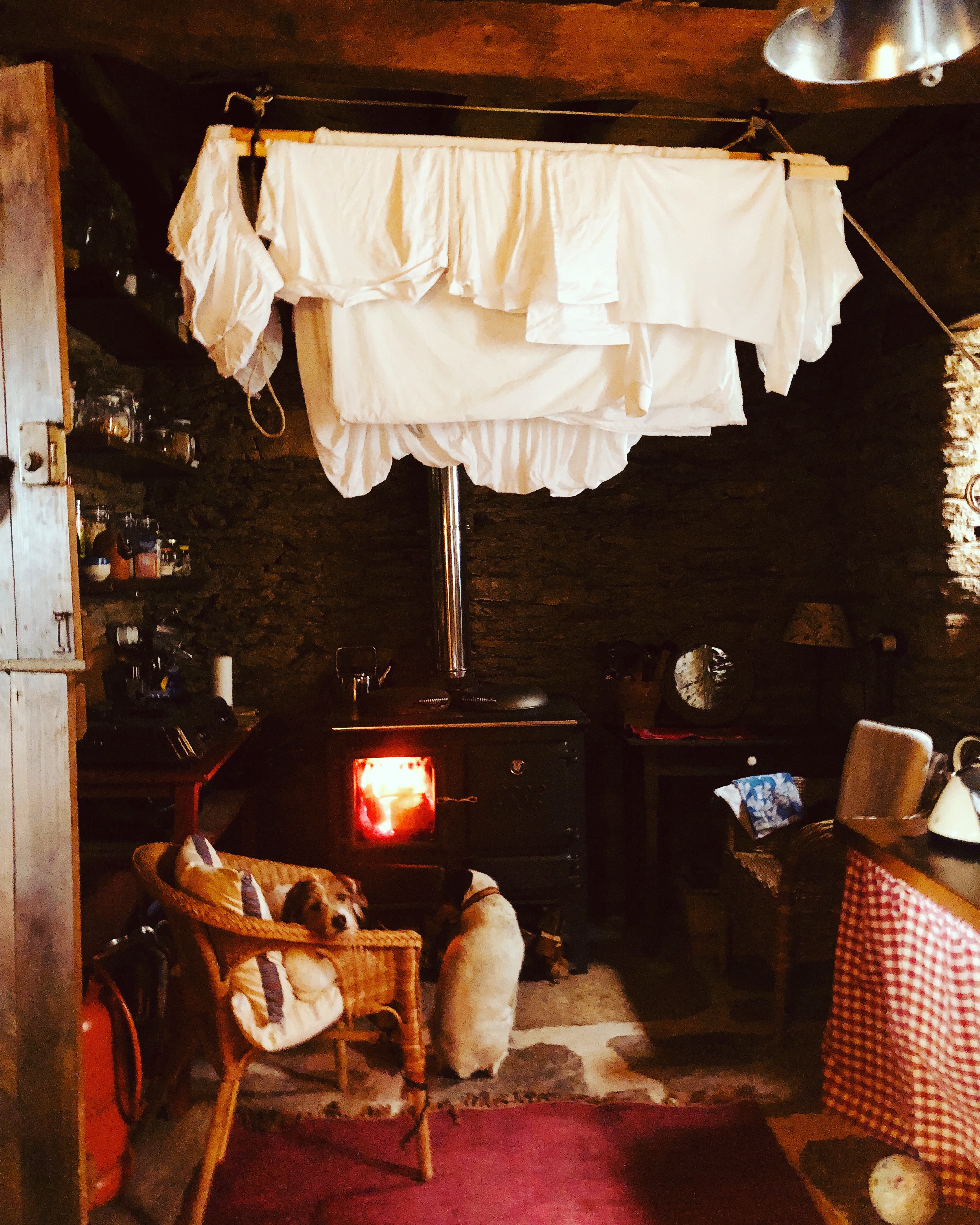 God, cow shit smells awful. It’s evening and I’m sat by the stove in the kitchen. Supper has been and gone, candles are lit and cast their glow on the windowsill. I have a mug of Earl Grey tea and Irishman has his PG Tips and after some bickering, the three dogs have finally sorted […]

Hello, this is a public service announcement … Dear friends, last year Irishman and I were invited to appear on a British TV show called ‘A New Life In The Sun’. After it aired, several of my blogging friends in the US asked how they might be able to see it ( VPN is generally […] 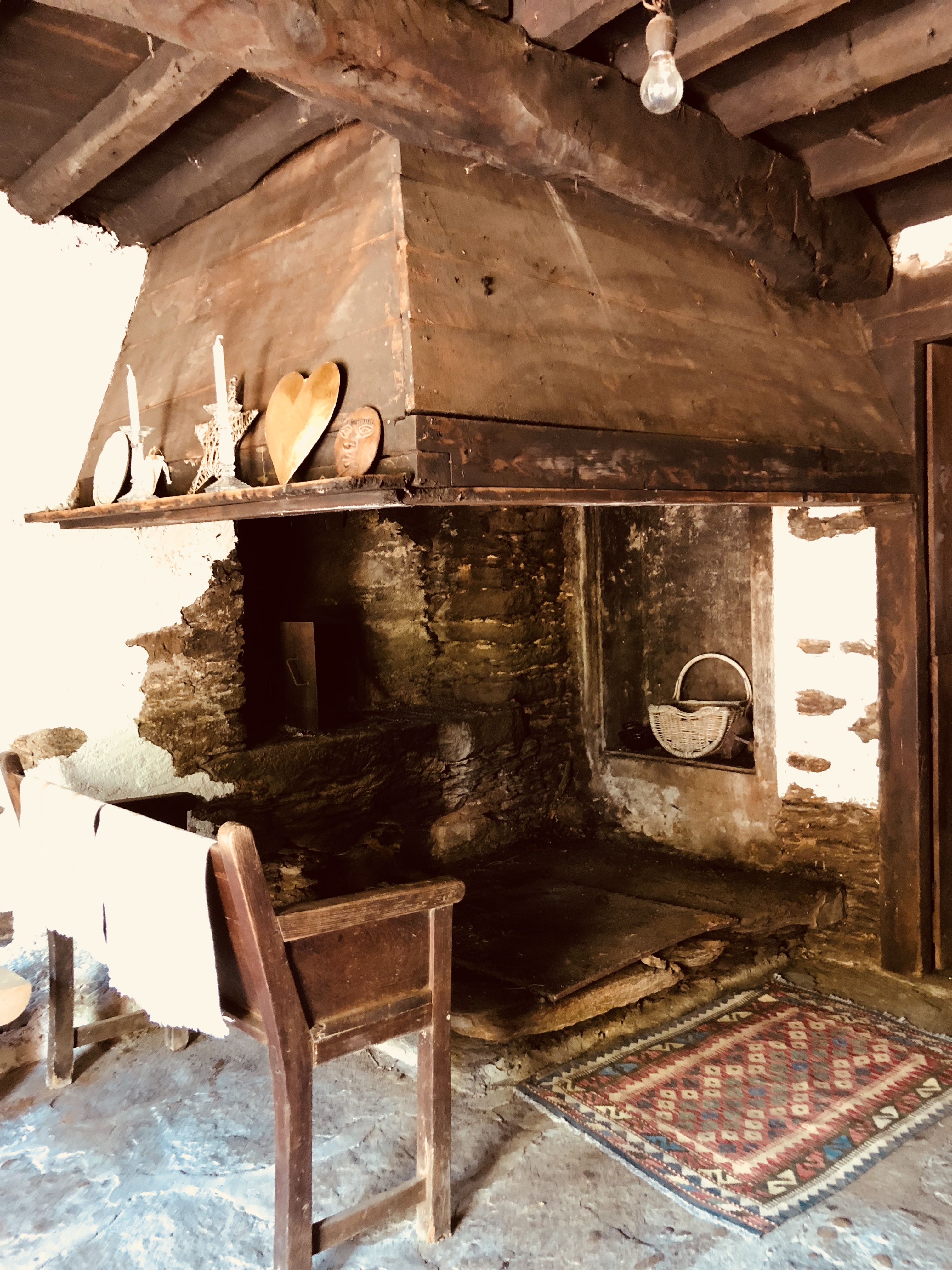 Well folks, those rose tinted spectacles of mine took a spectacular tumble the minute we opened the front door. My fantasy of The Red House stopped right there on the doorstep.  All my dreams for a perfect first evening smashed in to a thousand tiny pink pieces. If the weather on this summer solstice night […]

Out Of The Blue 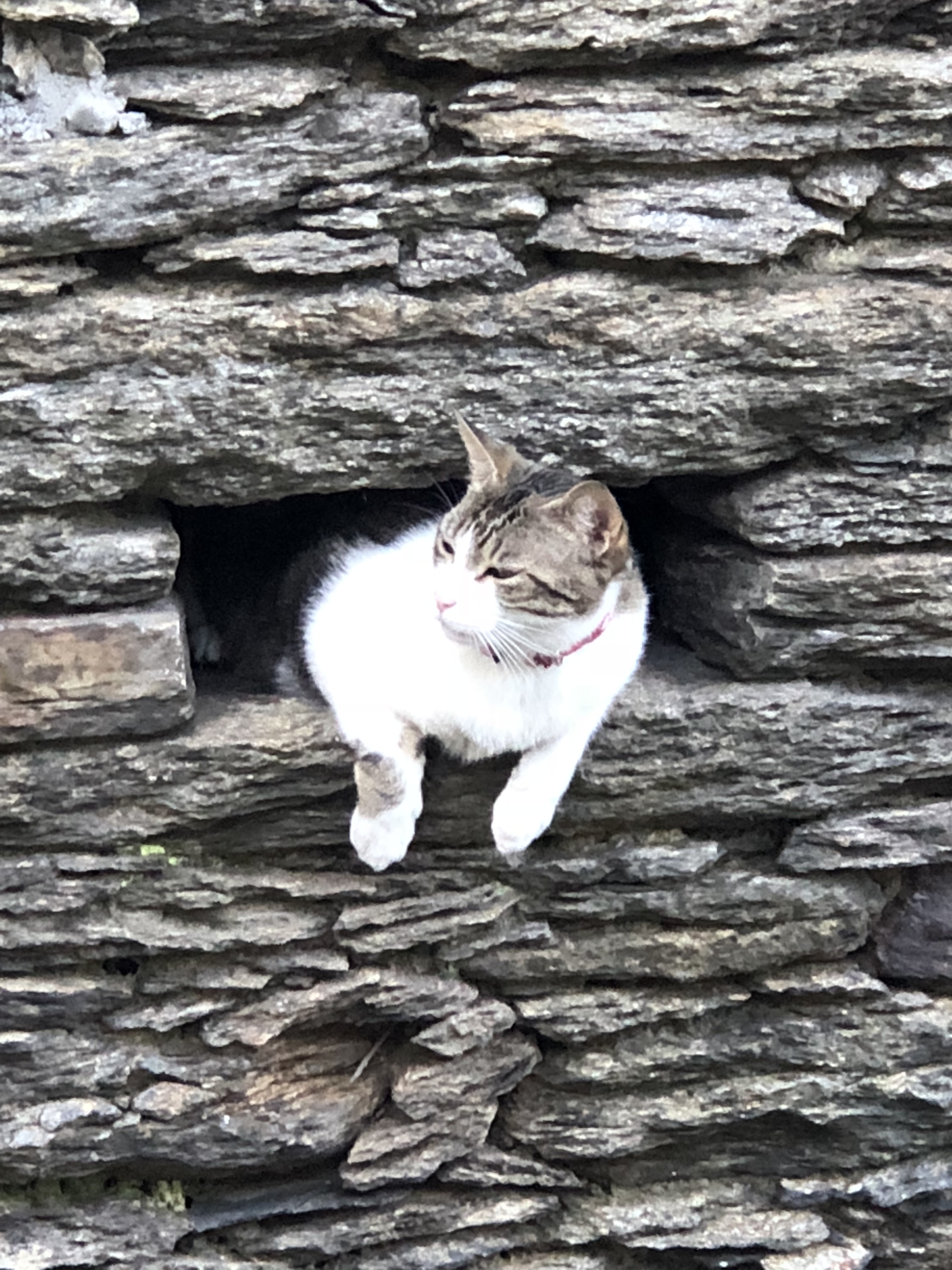 It was early March and The Red House had been my obsession for four months. It was the last thing I thought about as I went to sleep, the first thing that I thought of each morning and in between I’d dream of it. My days were punctuated with visualisation, plans, scheming and dreaming. Everything […]

“Even the most unnatural is Nature; even the creations of the crudest philistines express some of Nature’s genius. Who does not see Nature everywhere, will see her nowhere in the right way.”

The full extent of Goethe’s significance in the history of culture may not yet have been widely realized. In many ways, his works seem still to be gaining in influence. In particular, with regard to his work as a scientist, he surprises with astonishing foresight and continues to provide deep inspiration to the emerging discipline of holistic science.

Goethe is most highly regarded for his work as a poet and his scientific writings are less well known. He is to German literature and culture, what Shakespeare is to the English, Cervantes is to the Spanish and Montaigne is to the French. Today, Goethean Science is practiced mainly at the Nature Institute, in the USA, at Pishwanton inScotland, and at the Goetheaneum in Switzerland.

At the Life Science Trust in Pishwanton, Scotland, Margaret (image)

Rudolf Steiner, the founder of the movement of anthroposophy and initiator of a popular alternative education system, was deeply influenced by Goethe and so was Carl Gustav Jung. Steiner wrote in his book on Goethean Science:

“Goethe’s world-historic significance lies, indeed, precisely in the fact that his art flows directly from the primal source of all existence, that there is nothing illusory or subjective about it, that, on the contrary, his art appears as the herald of that lawfulness that the poet has grasped by listening to the world spirit within the depth of nature’s working. At this level art becomes the interpreter of the mysteries of the world just as science is also, in a different sense.”

Anthroposophy, is a philosophy founded by Rudolf Steiner, who was deeply influenced by Goethe

In Goethe’s vision, nature permeates everything, including the human mind and imagination. Hence nature’s truth does not exist as something independent or objective but is revealed in the very act of human cognition (Tarnas, 1991). Richard Tarnas argues that Goethe was the first to develop an epistemological perspective that was radically different from the Cartesian-Kantian epistemological position, which has been “the dominant paradigm of the modern mind”.

The basis of this new epistemology was the “fundamental conviction that the relation of the human mind to the world was ultimately not dualistic but participatory…. In this view, the essential reality of nature is not separate, self-contained and complete in itself, so that the human mind can examine it ‘objectively’ and register it from without. Rather, nature’s unfolding truth emerges only with the active participation of the human mind. Nature’s reality is not merely phenomenal, nor is it independent and objective; rather, it is something that comes into being through the very act of human cognition. Nature becomes intelligible to itself through the human mind” (Tarnas, 1991).

Although his literary work has attracted the greatest amount of interest, Goethe (image) was also keenly involved in studies of natural science.

For Goethe the phenomenon is not an object. Imagination becomes the means for investigating the phenomenon itself and not what goes on behind the phenomenon, like in atomism. The phenomenon ceases to be an object standing over and against consciousness and the phenomenon begins to appear in consciousness, instead of appearing to it. He argued that the existing “ontological gulf” between science and its object, is a fundamental prerequisite of reductionist science, as it allows for a science of measuring and experimenting, in which an “object appears to consciousness it does not appear in consciousness.” It is precisely this ‘ontological gulf’, which enables the moral and ethical detachment, with which modern science continues to evade responsibility for its participation in bringing about the current environmental, social and economic crisis (for more detail see “Zarte Empirie — A Goethean way of Knowing”).

In his book The Rebirth of Nature, Rupert Sheldrake mentions that T.H. Huxley was asked to write the opening article to the first issue of the scientific journal Nature in 1869. Referring to Goethe’s understanding of Nature, Huxley suggested in this article that “long after the theories of the philosophers whose achievements are recorded in these pages, are obsolete, that vision of the poet will remain as a truthful and efficient symbol of the wonder and mystery of Nature” (in Sheldrake, 1991, p.70). Huxley began his article with a combination of Goethe’s descriptions of nature, which are quoted below (see the journal Nature, 1869, vol. 1, p.9):

“Nature! We are surrounded and embraced by her; powerless to separate ourselves from her, and powerless to penetrate beyond her … We live in her midst and know her not. She is incessantly speaking to us, but betrays not her secret. …She has always thought and always thinks; though not as man, but as Nature. …She loves herself, and her innumerable eyes and affections are fixed upon herself. She has divided herself that she may be her own delight. She causes an endless succession of new capacities for enjoyment to spring up, that her insatiable sympathy may be assuaged. …The spectacle of nature is always new, for she is always renewing the spectators. Life is her most exquisite invention, and death is her expert contrivance to get plenty of life.”

Goethe also wrote a book on the Metamorphosis of Plants (image)